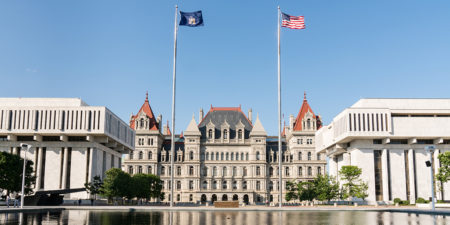 PCDC submitted comments this month to the federal Centers for Medicare and Medicaid Services (CMS) in response to New York State’s Medicaid 1115 waiver extension request. The comments urge the federal administration to deny the state’s proposal to transition the state’s Medicaid pharmacy benefit from Managed Care to Fee-for-Service (FFS).

If approved, the pharmacy transition, also referred to as the “carve-out”, would virtually eliminate savings realized through the federal 340B Drug Pricing Program that covered health care entities rely on to meet the health care needs of New York’s sickest and poorest residents.

“The proposed carveout would drastically curtail the scope and reach of services now available to low-income medically underserved New Yorkers, undermine the fiscal stability of critical front-line community providers, and devastate a NYS safety-net system that is essential to address longstanding health inequities,” PCDC stressed in the comments.

In the time since the waiver application was submitted to CMS, the New York State Legislature rejected the Department of Health’s proposal to implement the pharmacy benefit carveout on April 1, 2021 and enacted statutory language to delay the carveout at least until April 1, 2023. However, PCDC continues to have concerns about the carveout, including the need for real stakeholder input and the harmful impacts to Medicaid beneficiaries and safety net providers.

Primary Care Development Corporation (PCDC) appreciates the opportunity to comment on New York State’s (NYS) request for a three-year extension of its Section 1115 Medicaid Redesign Team Waiver demonstration (1115 MRT Waiver). While PCDC is generally supportive of the intent of the 1115 MRT Waiver demonstration—to improve the Medicaid program while containing costs—we write to express our strong opposition to NYS’s proposal to amend the 1115 MRT Waiver demonstration to carve out the pharmacy benefit from Medicaid Managed Care to fee-for-service. Carving out the pharmacy benefit will deny NYS federally qualified health centers (FQHCs), HIV Ryan White providers, disproportionate share hospitals, and other safety net providers the benefit of the Federal 340B program in Medicaid, which enables those providers to access pharmaceutical drugs at reduced costs and then reinvest those savings into initiatives that expand access to care and services.

If approved, the carveout will virtually eliminate access to savings realized through the Federal 340B Drug Pricing Program (340B program) which covered entities rely on to meet the health care needs of New York’s sickest and poorest residents, including Medicaid enrollees. The proposed carveout would drastically curtail the scope and reach of services now available to low-income medically underserved New Yorkers, undermine the fiscal stability of critical front-line community providers, and devastate a NYS safety-net system that is essential to address longstanding health inequities.

PCDC History of Impact and Service

Over the last 28 years, PCDC has worked with health care organizations, systems, and providers across the Empire State on over 3,200 financing and technical assistance projects to build, strengthen, and expand primary care operations and services. In just the last five years, PCDC has provided nearly $125 million in affordable and flexible financing to expand access to primary care across New York State.

As a lender to many 340B entities across New York, PCDC is aware that 340B savings are, in many cases, a critical financial lifeline for safety net providers. PCDC understands how lenders assess risk and make decisions on where to invest capital. Even before the COVID-19 pandemic and resulting financial hardships, access to capital was limited for health centers and other safety net providers. We know that lenders scrutinize the financial stability of an organization and the reliability of its funding. The uncertainty imposed on the market by recent regulatory changes to 340B at the federal level is compounded by state proposals like the carve-out, in addition to the financial strains resulting from COVID-19, which collectively increase perceived and real risks associated with financing safety net providers. This may jeopardize health centers and other entities financial stability as well as their access to capital and is dangerous and damaging for these providers at a time when revenues have already plummeted.

The savings providers receive through the 340B program serve as a stable component of the revenue that lenders rely upon when evaluating an organization’s financial sustainability and its ability to manage debt. This financial sustainability enables CDFIs like PCDC to offer more affordable interest rates and terms, attracting additional private investment from traditional financing institutions – ultimately reducing costs for the provider over the long term and opening financing avenues for future expansions and improvements.

Over the next months and years, safety net facilities will need even greater access to capital to fund COVID-19 related expenses to recruit and train furloughed staff in new delivery methods, redesign patient flow and facilities to accommodate new protocols for onsite care, invest in technology to support telehealth, implement a “bimodal” (physical onsite/virtual) primary care delivery platform, purchase personal protective equipment (PPE), and fund ancillary operating costs associated with patient service delivery. Reducing 340B revenue would be devastating, undermining the sector’s stability, provoking partners and investors to reduce capital investment, and eroding the safety net landscape when it is needed most.

From our experience expanding and enhancing primary care in low-income communities, we have an intimate knowledge of how health centers and safety net providers rely on the 340B program to invest in access to care for patients with the greatest needs and who are hardest to reach. Because 340B covered entities inherently see the most vulnerable populations, reductions in the program’s savings are detrimental to the physical, mental, and economic health of the communities they serve. Reduction in the ability of the health care safety net to provide services will lead to worsened health outcomes and depressed local economies.  Health centers and other safety net providers are anchor community institutions that provide comprehensive care and maintain the health of communities, thereby both creating employment opportunities, and supporting worker health and productivity.

The services made possible by 340B savings not only promote optimal health outcomes in medically underserved communities but are also central to NYS’s efforts to realize important public health goals, including the NYS and Federal plans for Ending the HIV Epidemic, for eliminating hepatitis C, for addressing the opioid crisis and stopping overdose deaths, and for ending the COVID-19 crisis. Many health centers and clinics are using 340B savings to support unfunded costs of current COVID-19 vaccination activities, such as vaccine related outreach and patient education and administering vaccines to their staff and patients. These providers are embedded within medically underserved communities and have earned the trust of our most impacted and vulnerable populations. It is critical to ensure that these community-based providers have the resources they need to distribute COVID-19 vaccines quickly and efficiently to the neediest New Yorkers.

PCDC supports NYS’s stated goal for the three-year waiver extension: to maintain the stability of the state’s Medicaid program while the NYS Department of Health and stakeholders consider the impact of the COVID-19 pandemic on health care delivery to inform ongoing redesign efforts. However, the pharmacy carveout amendment would significantly degrade the scope and quality of care available to the medically underserved Medicaid enrollees and other low-income New Yorkers who rely on the critical care and services provided through the utilization of 340B savings.

Proposed Savings and Reimbursement Are Insufficient

The carveout would not serve the overarching MRT demonstration goal to reform and improve the Medicaid program while containing costs. While the NYS DOH asserts that the carveout would have saved the state $87 million in fiscal year 2022, it would have resulted in an estimated $245M FY22 loss in 340B reinvestment in care and services available to the most fragile and underserved patients in the state. FQHCs, alone, stand to lose a collective $100M per year in 340B savings. A survey of just 15 Ryan White programs and other community health centers focused on HIV prevention and care found they would lose $56M annually, and a small subset of hospitals reported that they would lose an additional $87M in the first year. The Menges Group has also refuted the projected savings, calculating that the state will actually lose $154M in the first year of the carveout and a total of $1.5B over five years, in large part due to avoidable inpatient and emergency care, further undermining any confidence in the veracity of the proposal’s budget neutrality assertion.

In recognition of the negative financial impact the carveout will have on safety net providers, the waiver extension includes a one-time allocation of $102M to support covered entities that currently benefit from 340B savings, although there is no methodology for distribution included in the waiver request. This one-time funding is not only woefully inadequate, representing less than half of estimated losses, it is not a sustainable solution. With such funding subject to the annual state budget process, there would be no assurance of ongoing provider compensation for lost 340B savings. Many of the 340B financed programs are found in low-income communities of color, the same communities that have been ravaged by COVID-19. Now is not the time to further undermine those critical programs by removing access to savings generated by 340B.

As noted by the NYS DOH in the extension proposal, 98% of the over 700 public comments the state received on the draft request expressed opposition to the pharmacy carveout, warning of the negative impact on 340B covered entities and the vulnerable populations they serve, and of the inadequacy and unsustainable nature of the proposed compensation fund. The lack of a substantive response by NYS in the waiver extension request reflects the state’s general lack of interest in stakeholder input on this issue. In fact, a 340B Advisory Board convened by the NYS DOH was given no opportunity to discuss alternatives to the carveout, so rather than making “nonbinding recommendations” as requested by NYS DOH, members of the group stated publicly that they refused to offer any recommendations.

In the time since the waiver application was submitted to CMS, the New York State Legislature rejected the Department of Health’s proposal to implement the pharmacy benefit carveout on April 1, 2021 and enacted statutory language to delay the carveout at least until April 1, 2023. The NYS Department of Health has indicated that they plan to move forward with the carveout at that time.

The 340B program is a well-established, existing mechanism created by Congress to ensure safety-net providers have the necessary resources to expand uncompensated care programs and to adequately care for their patients’ health and health related social needs. NYS Legislative and Executive leaders have agreed to delay the policy, allowing more time to engage in a comprehensive discussion of the pharmacy benefit carveout and the impact on 340B providers. However, PCDC continues to have concerns about the carveout, including doubts about achieving budget neutrality, the need for real stakeholder input, and the harmful impacts to Medicaid beneficiaries. We are also concerned that CMS approval of the carveout would set a dangerous precedent for other states, with the potential to undermine the 340B program nationwide, causing lasting harm to the country’s essential health care safety-net.

We urge CMS to reject the New York State’s proposed amendment to its 1115 MRT waiver demonstration to carve the pharmacy benefit out of Medicaid managed care.

With questions or follow up, please reach out to: