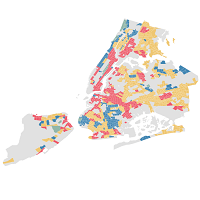 Deliberate disinvestment practices in New York City (NYC) have contributed to persistent disparities in health and socioeconomic status across the city. The Primary Care Development Corporation (PCDC) has released new findings that examine the lasting effects of redlining in NYC.

In 1938, the Homeowner’s Loan Corporation created so called “residential security maps” to guide entities toward practicing “responsible lending.” Neighborhoods deemed “hazardous” for lending were outlined in red—a process we know today as redlining. These maps were used as the basis to systematically deny mortgages and services to residents of redlined neighborhoods, regardless of individual creditworthiness. Predominately Black, urban neighborhoods were redlined in NYC. Despite being banned in the Fair Housing Act of 1968, decades of disinvestment have contributed to long-lasting effects for residents of formerly redlined communities.

The Issue Brief finds that:

“This neighborhood-level discrimination practice, largely based on race, is a form of structural racism. It reinforced discriminatory distribution of resources and services and has undoubtedly contributed to poor health outcomes in Black communities,” says Angela Allard, the study’s primary author.

“Investing in access to high-quality primary care directly in these communities can begin to address accumulated inequalities and improve both the health of residents and their economic opportunities.” Says Allard. 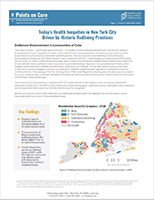